First night in a new bed

There are a few signs that experts will tell you to look for when your child is ready for their own bed. We have been noticing these over the past couple of weeks so we decided to give it a try.

We purchased the Vikare extendable children's bed from Ikea and decided to put it together downstairs. Rylan had always seemed to enjoy it while at the store but we wanted to get him used to it downstairs before sticking it in our room. After a few weeks of him getting adjusted to it and sleeping on it occasionally for naps, we decided last night would be the night to give it a full try.

We spent some time preparing the room including baby proofing it. After a bit of rearranging, we brought the bed up and then Rylan. He looked amazed. His eyes were as big as could be. You could see the excitement in his eyes when he saw the bed up in the room and the crib no longer there.

It is not uncommon for us to be able to lay Rylan down in his crib and let him fall asleep on his own but we wanted to make sure he was asleep before leaving the room during this first night. After a bit of expert bouncing from my wife, he was off to sleep. With our newly purchased baby monitor, we worked down stairs putting up our Christmas tree while listening for any sounds. I faintly noticed a noise and after a quick inspection, my wife said that he woke up, drank from his cup and then passed back out. Perfect! 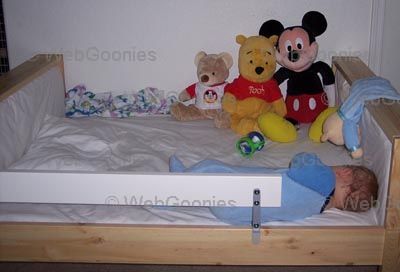 My wife tells me that this morning during his normal wake up time that he was walking around the room looking excited again like he was a big boy. He really is.

Our mission now is being able to get him to a point where we can lay him down and let him fall asleep on his own. This may be a challenge but we are up for it.