This year we wanted to take Rylan trick or treating so we made plans to check out the Radio Disney sponsored event at a local mall. Rylan helped out trick or treating around the stores by very carefully selecting which candy he wanted. People were very responsive to Rylan walking around begging for candy and most of them seemed to get a kick out of it. We finished up our candy snatching there and decided to move on.. 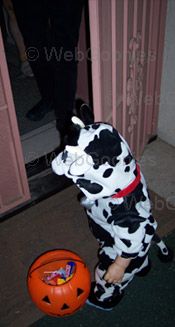 We made a quick stop at a local neighborhood and decided to try our hand at trick or treating there. We walked Rylan in between the houses but when we got to the door we would put him down and give him his bucket. After a quick ring of the doorbell he would step closely to the door and wait for it to open. As if he knew what to do, they opened the door and he would speak. He would even say something on his way out.

We stopped by grandma and grandpa's house to do a bit more trick or treating and then decided to stop by a local church that was having a large event. They had all types of events to try out but unfortunately Rylan was a bit too young for them. We did however score a bit more candy for Rylan. 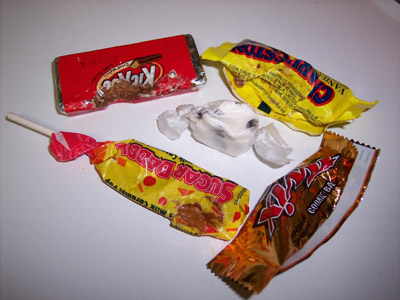 What you see above is the aftermath of Rylan's secret attack of the candy bucket. While going between houses he snuck into the bucket and proceeded to munch on some of the candy. We quickly put a stop to it but dang was it funny. It seems to us that he thoroughly enjoyed this Halloween, I know that we certainly did.

It sounds like Rylan had a lot of fun and things to do as well as making quite a lot of candy loot!

I'm surprised to hear that Rylan talked to the treaters since he's so young. My daughter would say trick or treat (which she waited until Halloween to actually start saying) before we'd get to the door or before the treaters opened the door.

A big thanks to both of you for being great parents and taking Rylan out trick or treating; Ya'll are a shining example of a united, cooperative and loving family. Some kids aren't as lucky to have both parents interested in doing things with their kid.