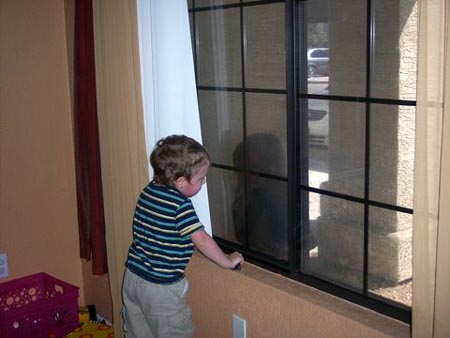 Over the weekend while the kids were outside riding their tricycles, another girl decided that she wanted to play as well. She gathered Rylan's attention from the other side of the street by playing with a ball and talking to him. We had seen her and her dirty/scratched sisters running around the last couple of days going in and out of peoples homes at random. Even homes that don't have other children. It was clear that they were not being supervised.

Our parent mode quickly kicked in when she was clearly teaching Rylan that it was normal to throw a ball into the road and go run after it. This was quickly put to an end as far as Rylan was concerned. When it was time to head back inside, the little girl decided that it was her home as well. She nearly forced her way passed my wife and after seeing a few of the toys inside, her interest was further peaked. After getting the girl out of the doorway, she headed off only to return a few minutes later. Rylan and the girl had a moment as you can see in the picture. The stalker continued to come back throughout the day. She has been attempting to go in other peoples houses as well which is just amazing. It's almost like they don't know where they live and they are just wanting to go into any home. We have yet to find out where they live. Her sisters, as with her parents, just don't seem to understand what is happening or may. It mind blowing to us and while she may be fine to play with, her actions are not what we are wanting our children to learn right now.

While talking to Rylan through the window she told him to go open the door. He said "OK" but really knew better. Luckily we have a security door with a keylock so the kids cannot just roam out of the home. Mark this stalker down on our watch list.