While everyone else has been watching the Olympics, we have been sampling the new Pampers Cruisers with Dry Max. As I previously mentioned, Pampers provided some of the Olympic athletes families with these same diapers.

We received our sample pack of them last week and immediately put one on Kaitlyn. First impression is good. They are so thin that it makes you wonder just how well they are going to work. Kaitlyn enjoyed putting her pants on afterwards and we noticed that you no longer experience the diaper bulge that is typical while wearing diapers. She was able to move around easily with them and she seemed to like them a lot.

As the pack was being used we experienced one minor leak. These diapers do start out as the thinnest diapers I have seen but as wetness is introduced, they blimp up. They blimp up like crazy. I cannot be certain but I am pretty sure that Kaitlyn is not drinking any more water than normal which would cause these diapers to swell up as they do. Moisture or not, these diapers did not cause any diaper rash so that was definitely a good thing.

All in all, I would suggest these diapers for any type of travel. These diapers are easily equal to two Pampers diapers to the thickness of 1 normal diaper. I imagine they would be appreciated in a diaper bag. Speaking of diaper bag, today I am opening a giveaway for a pack of these Pampers Cruisers with Dry Max and a Liz Lange Diaper Clutch. This giveaway is open until 11:59pm PST on March 9th. To enter, just leave a comment. 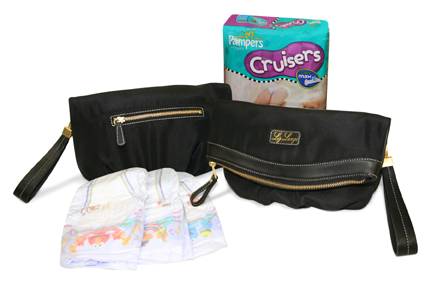 UPDATE: The contest has been completed. Our random winner is comment #20, Fredrick. Please contact me with your mailing address so that I can have this sent to you.

Thanks everyone for participating!

I am the first to comment. That bag looks neat!

My pregnant wife would love getting the freebies. Thanks for the review.

Great giveaway! I'm interested in seeing how these diapers can be 20% thinner and still hold up for 12 hours.

Are those Sesama Street characters I see on the diapers?

Count me in too please. Thanks.

I was interested in these. Thanks for the review.

Thanks for the chance!!

We love Pampers. Thanks!

We don't use diapers anymore but I know of a family that would love winning this.

Anything to save space in our tiny house. Thanks!

I love freebies. Thanks.

Would love to try these too. Thanks.

My new daughter would love to try these. Thanks.

My granddaughter would appreciate these.

We could always use some extra diapers over here! New baby on the way.

This would be a great help.

Times are tough. We would benefit from a freebie pack of diapers. :)