The kids definitely had a lot of fun this year with Christmas. They learned to sing a bunch of new songs and they really took hold of the holiday. Kaitlyn learned from Rylan's excitement that this was a holiday not to miss. As we do every year, the kids had a few parties and gift opening a few days before. They enjoyed the time with their cousins, aunts, uncles and grandparents.

On Christmas Eve the kids made Christmas cookies for Santa and then made sure to leave him a few for his troubles. We didn't forget the carrots for the reindeer. The kids were a bit put off though when I told them that Santa may let the reindeer in and they may poop on the carpet. Kaitlyn let out a "ewww stinky" and Rylan immediately wanted to take them off of the plate. They ended up leaving them and also leaving Mrs. Claus a cookie as well.

The kids of course woke up to a magical sight when they came down stairs. Grandma was there to greet them and that was just the start of the fun. They didn't seem to have any gifts that were disliked but Kaitlyn did get a scare when she opened Rylan's gift to her and found nothing in it. The gift in fact got caught in the tissue paper that was pulled out in a hurry. Rylan had a big surprise coming to him from Grandma when he opened his big gift which was a Bat Man cave toy. He was thrilled. Kaitlyn's most favorite gift was certainly the vanity that her Great Grandma sent. Santa wrapped up the morning by dropping off two toys of his own which was a new kitchen set and dishwasher.

I had made three types of banana bread for the morning so we calmed the morning down by eating together. It wasn't long before we headed back out to eat with both Grandma and Grandpa at Buca Di Beppo.

Christmas 2009 is over and I can't wait until next year to see the kid's face of pure enjoyment. 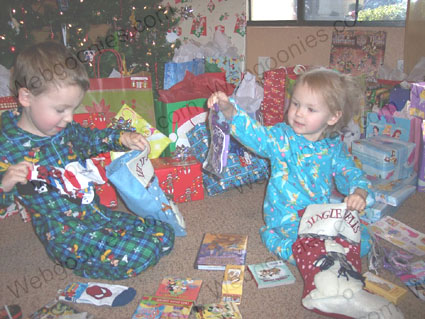